On the opposite side of San Antonio city center from Fort Sam Houston, Lackland AFB arguably has a more beautiful local area, with the Gateway Hills Golf Course nearby, as well as the Pearsall Park to the South. A variety of delicious local restaurants are available off-base, including residents favorites like El Coqui Restaurant, Yorky's Taco House, and Brenda's Burgers. Endless other dining options are to be found throughout the city. Personnel and those living near Lackland AFB also enjoy quick and convenient access to many of the best parts of San Antonio, such as the various theatres, the museums, including the McNay Art Museum, Buckhorn Saloon & Museum, the Texas Rangers Museum, and various cultural attractions like the San Antonio Zoo and Majik Theatre for children. River Walk and the historic Alamo are also near Lackland AFB, and the base is very close to SeaWorld as well.  Six Flags Fiesta Texas, Splashtown, and other great amusement parks are also available in the area! Residents of Lackland AFB also enjoy the great shopping options that abound at San Antonio’s many malls and outlets.

Housing on Lackland AFB is not for sale, but there are a number of housing options just off-base.  A few lots are available at very low prices, while small houses start at $70,000 and feature 3 beds and and 1 bath on a 900 square foot lot. Larger, higher quality homes are also available for around $200,000 and have 3 beds, 3 baths on 2000 square feet.

If you are interested in a home near Lackland AFB, a cornerstone of our nation's security, contact us today!

Excellent starter home in the Indian Creek subdivision. Updated kitchen with backsplash and granite, ceramic tile all around the house, oversized yard. Location is great...

This home is a perfect starter or investment opportunity. Three bedrooms and one and half bathrooms, Central A/C and Heat, fresh paint, new blinds and new appliances are...

If you are seeing this, STOP! Call your Realtor, this home will not last long! Owner has done multiple upgrades, (ie. removing all carpet, newly painted exterior) Conv...

You will love the location with easy access to Highway 90, Loop 410, and 151. Convenient to Kelly AF Base. This is a fast growing area with lots of shopping, restaurants,...

Beautiful one story 3 bedroom and 2 bath home with spacious backyard in Meadow Village Neighborhood won't last long. Located next to 410 and 151 makes this home a conveni...

Come take a look at this beautiful 4-bdrm,1-bath home with a large covered back patio that was updated in the spring of 2019. Some of those recent updates include, lamina...

Vacant!!! Come take a look at this newly renovated home on at 6820 Cedarwood Court. This three bedroom one bath home has beautiful ceramic tile throughout and brand new g...

The possibilities are endless for this charming income opportunity residence featuring an interior ready to be updated with your personal touch. The home features 3 bedro...

Long time family home is now ready for new memories to be made. The home has easy access to Loop 410 and Hwy 151, and only 15 minute to downtown. Large backyard with ma...

1.1 acres of land Zoned MF-33. small back piece of property is located in Flood plain zone. Between apartments and a E-Z convenient store so it can be developed.

Welcome to the beautiful single-story home in the Meadow Village neighborhood. The home has an open floor plan with ceramic tile flooring throughout all main living areas...

Looking for your first home? This starter home is perfect for you! With three bedrooms and one bathroom, this house has plenty of space for you and your family. Enjoy fam...

Around 1750 SFT (Including converted garage) with a quarter acre lot. Beautifully upgraded 4 bedroom 2 bath, and a huge workshop (About 450 SFT) with half bath and RV Car...

An opportunity to invest on a good looking TLC home. This home features a 2 bedroom and one bathroom. The spacious primary room has a huge walking closet. An efficienc...

Located in a growing neighborhood, this lot is perfect for your next home build! Lot is 14000 sq. ft. measuring in at 75 x 140. Water services available! Zoned Reside...

What a gem, 3 bed with 2 bath, large living area and an office. Kitchen and bathroom have granite counter tops and metal roof.

A remarkable opportunity awaits for owner occupiers and investors alike at this charming home in Valley Hi. The main home includes 3 bedrooms and 1 full bathroom PLUS the...

This Property is an excellent opportunity for building a Strip Mall, Apartment Building, Self-Storage or other variety of commercial use buildings. Located near 410 loop ...

This newly renovated home will have a $1000 allowance for new appliances including a stove and dishwasher. This Three bedroom one bath will be perfect for a ready to mov...

Welcome Home! This updated one story home has 3 bedroom and 2 renovated bathrooms. Tile and vinyl through the home. A spacious master bedroom with master bath that has a ...

Welcome home! This lovely single story home features charming details and a carport, ideal for keeping vehicles cool in the Texas summer. Inside, provides a welcoming for...

Located minutes away from Lackland AFB, Grocery Stores, Restaurants, and easy access to highways 410 & US-90. This 4 bed 2 bath home has great bones and with a little lo...

This charming 4 bedroom, 3 bathroom home is now on the market! Enjoy cooking in this stylish kitchen with stainless appliances and a center island, great for food prepara...

Come and take a tour of this fully renovated home within 6 miles of Lackland AFB and within a couple of miles of nearby schools. Only 7 miles to downtown San Antonio! T...

Welcome home to 5539 Pearl Vly. Click the Virtual Tour link to view the 3D Tour. Sited amongst a manicured lawn this beautifully updated home boasts quality work on all e...

This San Antonio home has one story. This home has been virtually staged to illustrate its potential.

Bonus:Seller will gift new homeowner a stove 7 days before closing. This home tells a story of fun, openness and excitement. Home features a huge front and back yard with...

If you're seeking to build the house of your dreams this fabulous lot in Southwest side of San Antonio is just right for you! The area is close to nature, parks, major e...

This San Antonio one-story home offers granite countertops, and a one-car garage. This home has been virtually staged to illustrate its potential.

Amazing opportunity for your business or to generate income from multiple tenants. Property consists of two buildings. Building one has several offices, plus kitchen & fu...

Perfect Starter home! Beautiful completely remodeled 3/1 waiting for your family to call this place home. Home sits on Huge lot with plenty of space for pool and other ou...

Fantastic opportunity to build your own small subdivision. Property recently rezoned to R-3. Being sold with 2220 Calle Estrella for a total of 1.68 acres. Preliminary pr...

Fantastic opportunity to build your own small subdivision. Property recently rezoned to R-3. Being sold with 2240 Calle Estrella for a total of 1.68 acres. Preliminary pr...

Opportunity to develop this almost 3.5 acre parcel located inside 401 almost next to John Jay High School. Direct neighbors are Dollar General and Church's Chicken so co...

Great investment opportunity and/or starter home . Home located in a quite neighborhood with quick access to Hwy 90 and loop 1604 close proximity to shops, grocery and re...

1.0 acre with commercial potential with W Military frontage near Boeing and JBSA Kelly Field Annex. Located across the street from Pearsall Park. Lot next door on the c...

Currently occupied and operating as a Nursery and General Store, this single-story commercial listing has fantastic potential for an auto repair shop, collision center, w...

Great opportunity for investors or business owners to grab!! This commercial property is currently operate as a dine-in restaurant with over 3,000 sf and fully equipped. ...

Come see this prime commercial property, located in a high traffic area with 440 feet of frontage on Ray Ellison. The property will make a great location for any business...

THIS CUTE, COZY, 2082 SQ FT HOME IS IN A GREAT LOCATION! THE NICE QUARTER ACRE LOT IS ON A CORNER AND IS JUST WAITING FOR YOU TO MAKE IT YOUR HOME!

BACK ON THE MARKET!!! THIS PROPERTY IS READY FOR NEW OWNER. HOME CAN BE A GREAT AIRBNB DUE TO ONLY BEING 5 MIN TO LACKLAND AFB. HOME IS LOCATED IN NISD SCHOOL DISTRICTS A...

5 acres of unrestricted land on covel, Medio Creek runs right through the center of the property, there is also a large pond located on the back side of the land

Want to be close to the city but yet far enough to enjoy sitting in the back porch for the special relaxing time-come and view the home has lots of charm-close to Lacklan...

Have you thought about opening your own daycare? This location was previously used as a daycare and childcare learning center. Property has incredible visibility from ...

Amazing Unimproved 12.22 Acres of Land in a Residential Neighborhood. It is flanked by several major streets including Five Palms Dr. Located near Schools, Shopping and M...

Incredible opportunity to purchase 8.84 acres with frontage on both U.S. Highway 90 and Enrique M Barrera Pkwy. Perfect site for any retail, office or multi-family develo...

Great commercial land opportunity on the high traffic corner of Marbach and Pinn Road. The property has utility access with a total of 3.02 acres of prime commercial land...

11.09 acres in one of San Antonio's most rapidly developing areas. Just south of Hwy 90 and Loop 410 at the intersection of Ray Ellison and Five Palms Dr. Property runs f... 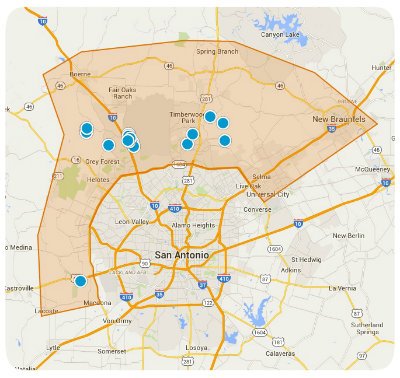